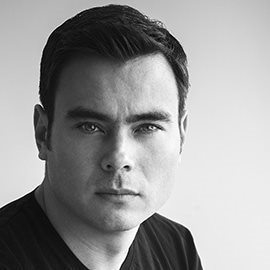 Born in Bogotá - Columbia in 1976, he completed his degree in 1998 at the Faculty of Industrial Design at the University of Bogota Jorge Tadeo Lozano, and obtained a Masters in Design at the Domus Academy of Milan in 1999.In 1997 he won the "Santo Domingo" prize for the best students of design and architecture in Columbia. In the same year, he completed an internship at the CID (Central Industrial Design) of Whirlpool Europe in Italy.
In 1998, as part of his university thesis he participated in the "New Designers" exhibition at the Business Design Centre in London.
From 2000 to 2004 he worked for the Giovannoni studio in Milan as a designer.In 2005 and 2008 he won the "Lapiz de acero" prize with the Morfeo sofa (Domodinamica) and the Manta chair (Poliform).
In 2006 he participated in the "La fabbrica del design" (The design factory) exhibition organised by Domus Academy and the municipality of Milan. In 2012 he participated in the "Lost in translation" exhibition organised by Domus Academy.
In 2013 he participated in the "master designers for Patrizia Pepe" exhibition organised by Domus Academy and the fashion brand Patrizia Pepe.
He has collaborated with internationally renowned companies, including: Alessi, Poliform, Oras, Cassina IXC, Nike, Microsoft (with MNML), Potocco and Domodinamica among others.
He was a professor at the European Institute of Design of Turin and was Project leader / visiting professor for Masters courses in product design and interaction design at the prestigious Domus Academy of Milan.His work has been published in renowned publications, websites and design books in Europe, Asia and America. He has held conferences at several universities in Italy, Mexico and Columbia.